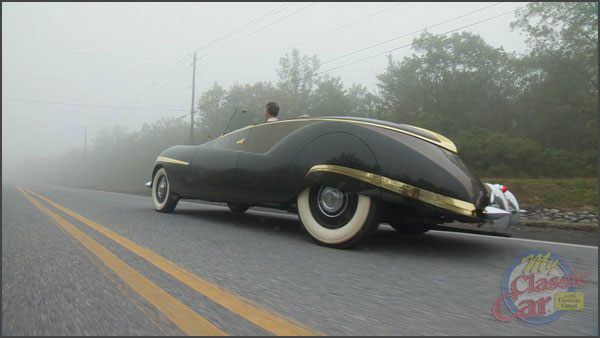 As a sponsor of the My Classic Car show on the Speed Channel, Cut2SizeMetals.com received an advance copy of their upcoming episode - a glimpse inside the private car collection of Jack Rich.  Of the over 80 cars in his collection, host Dennis Gage honed in on three French cars from the mid 20th century.  They have graciously allowed me to share a few pictures with you to go along with my appreciation of them below.

The first vehicle, a 1938 Delage, is shown to the right.  As the caption suggests, it has a center handle door which opens out maybe 8 inches, and then moves back parallel to the car.  Not only is it a unique way to open a door, but it makes getting in and out a pleasure.

Another really unique machine is the 1931 Avions Voisin C20.  This V12  has a beautfiul wooden propeller fan under the hood, as well as an airplane-like cockpit, both indicative of the Voisin's aeronautical heritage.  Voisin was an aviation pioneer, and worked in lighter alloys like aluminum for his designs.

The final car of the episode is truly stunning.  It is a Labourdette Rolls-Royce Phantom III Vutotal, and although lots of classic cars get the moniker "boat," this body was designed and shaped using naval carpentry methods.  This car was likely rebodied with the Labourudette in 1947 at a cost of $44,000 (or almost $425,000 in 2010 dollars).  The Vutotal part was an innovation as well.  Lacking the side or top frame of a traditional windscreen, the Labourdette attached the thick glass only to the hood, leaving a unobstructed "total view," as the name suggested.
If you find these cars as intriguing as we do, this episode of My Classic Car, number 6, will air this Sunday morning and Tuesday afternoon on the Speed Channel.  Check your local listings, and let us know what you think of these machines.