The Cut2Size Angle | Cars | We Drive a Ferrari, Lamborghini, Jaguar, and an Audi R8 in Vegas!

We Drive a Ferrari, Lamborghini, Jaguar, and an Audi R8 in Vegas!

A couple of weeks ago we were in Las Vegas for a conference (and in our last post, you could see these pictures of our work at the Aria Resort & Casino).  Since we're not really gamblers at heart, we found something much more fun.  We headed out to the desert with the folks from World Class Driving to drive 4 supercars:  the Ferrari 458 Red Italia, Audi R8, Jaguar XKR-S, and the Lamborghini Gallardo LP570-4 Spyder Performante (when you pay this much for a car, it probably should have a name this long).  Anyway, here are some impressions from an amateur but enthusiastic driver. 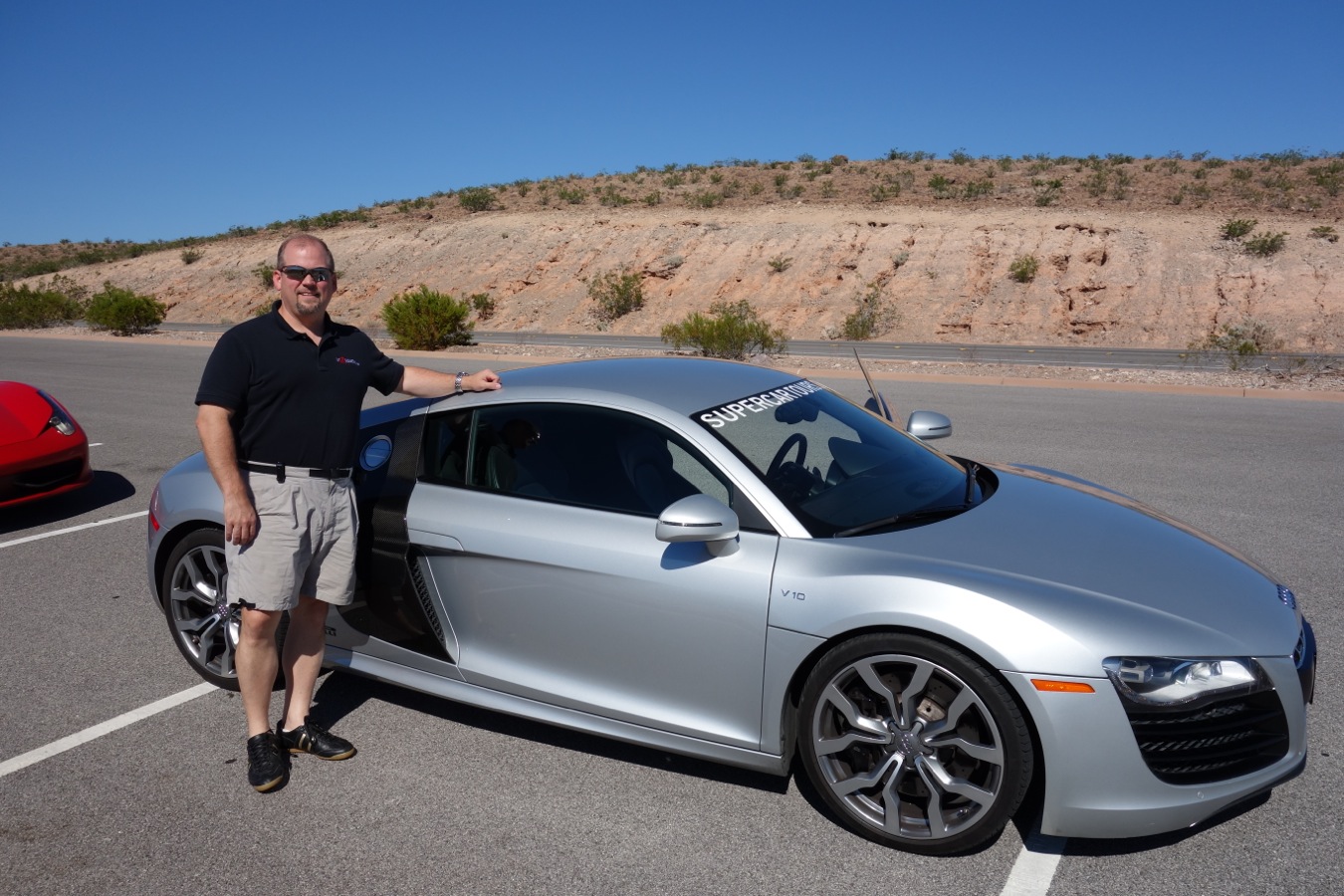 The Audi R8 was the first car I drove, and since we were winding our way from the strip to Lake Mead, I spent more time in traffic than on twisty roads.  Still, the 5.2L V10 responded instantly when I pressed the accelerator, and there was no doubt there were 525 horses under the hood.  Another couple who drove with us, on holiday from New Zealand, said they were able to make all four wheels spin when they launched it from a stop sign, which I'm sure they did, but in the city and in traffic, it seemed ill-advised for me to try. 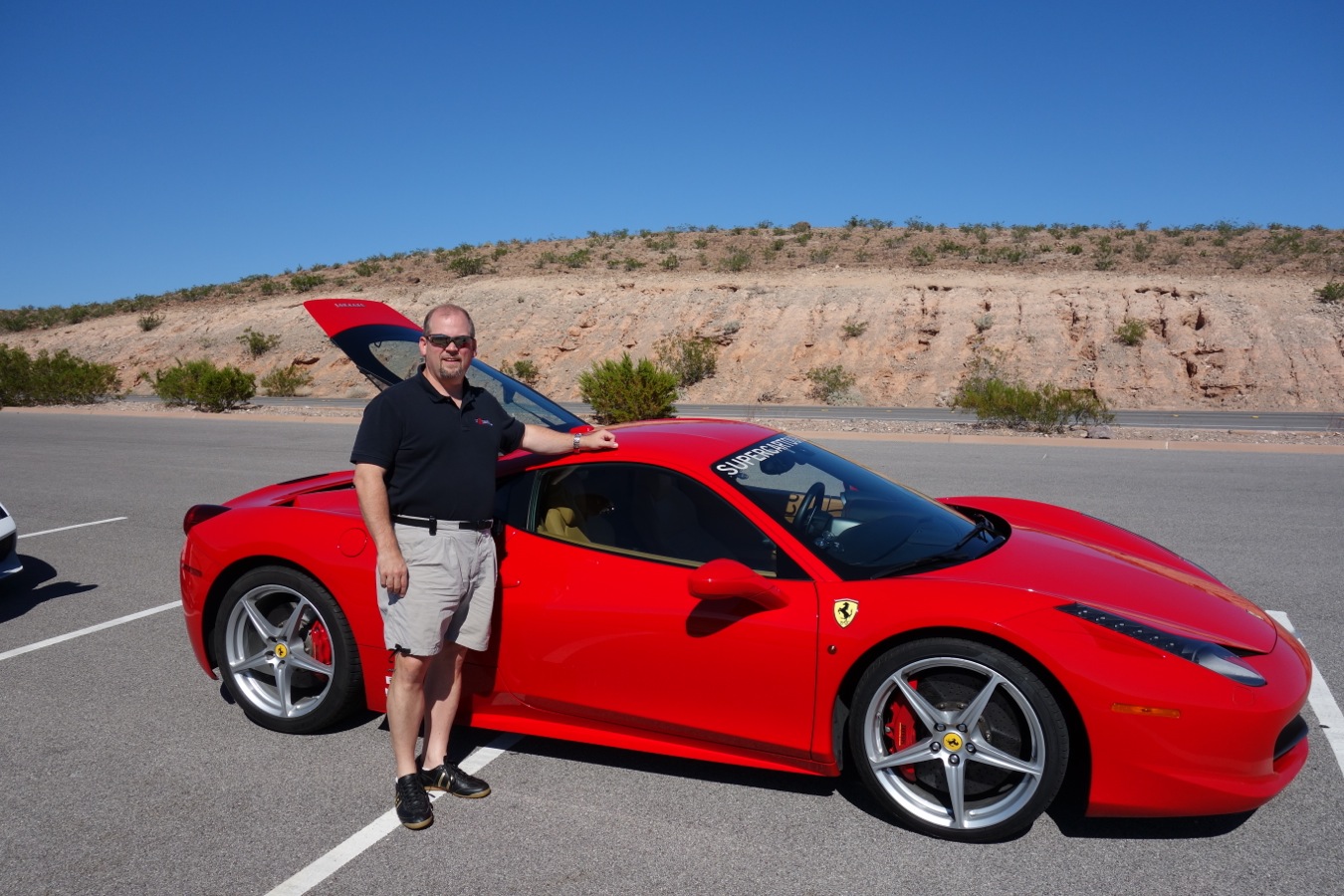 It is hard to pick a favorite among these cars, but this one is definitely in the top two for me.  It is easily the most beautiful, making the others' designs seem half-baked, or at least tame, by comparison.  The Ferrari sounds so good, and drives so intuitively, that I definitely pushed it harder than the others.  I red-lined it three times; once from a stop, and twice more closing a gap that had "inadvertently" appeared between me and the driver ahead.  Incredibly impractical for going to the market, or anywhere with another person, it still is so much fun that I can understand how someone might get passionate about this car.

Driving in a tight formation with 5 other drivers, through twisting desert roads, I found the 570 horsepower of the Lambo's V10 incredibly responsive, and only occasionally, slightly terrifying.  It feels absolutely glued to the pavement, which means you can go through turns at speeds and G-forces you didn't realize were possible. The brakes felt like they could stop a train, and pushed back as I applied more force.  Was it my favorite, though? Everything about this car screams “Race Me!” and since that wasn't the purpose of our outing, I may not be giving it its due. So as much fun as it was to drive for a half-hour, I can't imagine driving it across the country. 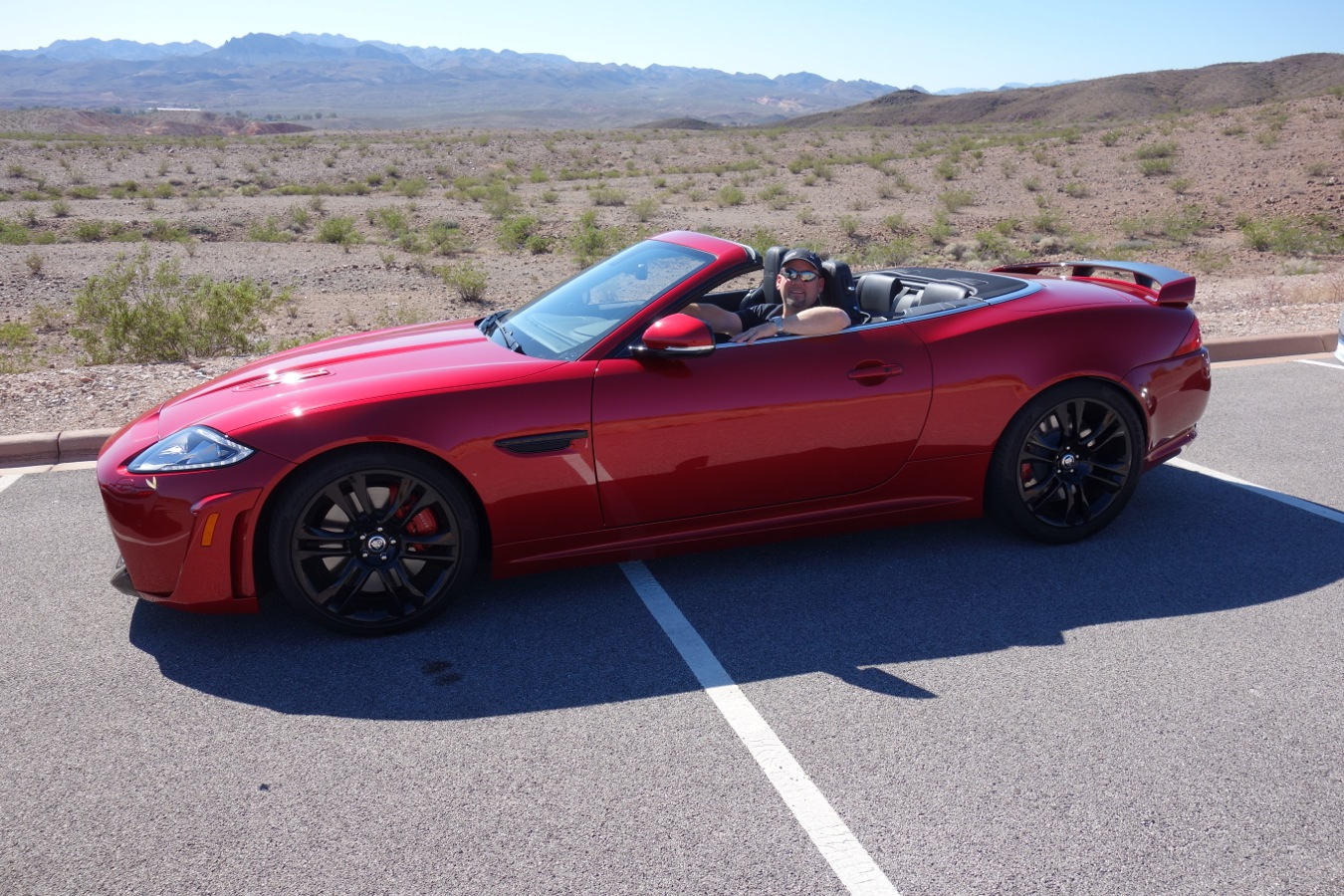 I have to admit, this car really surprised me.  I had agreed to this experience primarily to drive the beautiful, elegant Italian machines, and at the end of the day, this was my all-around favorite car.  Why?  In three words, Gran Turismo and Torque.  The Jaguar is an amazing comfortable car, and that's saying something, given that the Italians in the bunch cost twice as much.  It is a grand touring car in every sense of the word, and definitely felt like a car I could point east on I-70 and drive all the way back to Indiana.  Yes, there was carbon fiber here and there, like the Lamborghini, but it felt more like sitting in a luxury sedan than in the cockpit of a race car.  Or, it did until I drove it, which brings us to torque. The XKR-S has 502 lb-ft of torque, which is why it will rock from 0 to 60 in 4.2 seconds, and (I'm told) beat every other car here in the standing 1/4 mile.  If that preceding sentence means nothing to you, then let me summarize: in this car, at normal highway speeds, the acceleration will take your breath away.  It feels less like a car, and more like a rocket. What burning questions did I fail to answer?  Let me know in the comments!
Tweet